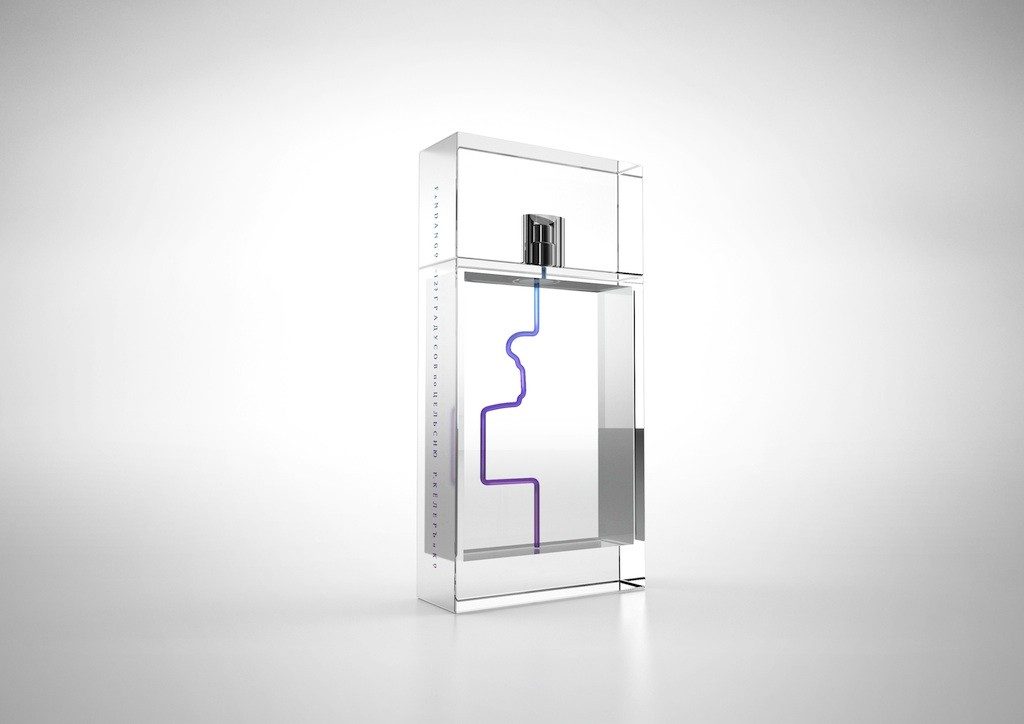 Among them Front and Nendo have respectively worked on French brand Guyla and Russian perfume houseKoehler & Co.

Nendo faced the challenge of reinterpret Russian brand Koehler&Co. about which not much information was available. The Japanese design practice took its inspiration from one of the company’s most famous fragrances called Fandango.

“We decided to determine the outline of the perfume bottle and express its silhouette with the tube inside.The tubes come in two types, one is a gradation of cold colours and the other is a gradation of warm colours” saysOki Sato.

Swedish design trio Front  got the inspiration from Guyla´s beautiful bottle from the ’20s. The bottle was shaped like a champagne glass, with double glass walls, the fragrance was contained between the two. Its surface was decorated with hand painted floral Art-Nouveau designs by Paul Poiret’s company Atelier Martine.

“We liked the idea with the connection between art nouveau´s reference to nature, plants and flowers and the botanical garden. This inspired us to make an object decorated by nature. We designed a cupboard with tracery that plants and flowers can climb on, referring to Poiret´s  patterns and his distinctive draped dress designs. The flowers that grow will be the same ones the perfume was made from, so the cupboard will smell like the perfume once did”, Front explain.

The mysteriously double walled bottle inspired them to create a bottle with an unexpected inside:  it will be lit up from within. The room is also a  light installation made from hundreds of tiny light dots like fireflies that will visualise the ephemerality of scent.

The two installations above mentioned, together with the ones by Tord Boontje, Fernando & Humberto Campana, Dimore Studio, Jaime Hayon, Lissoni Associati and Jean-Marie Massaud   will be within a diffused museum created by Ferruccio Laviani.