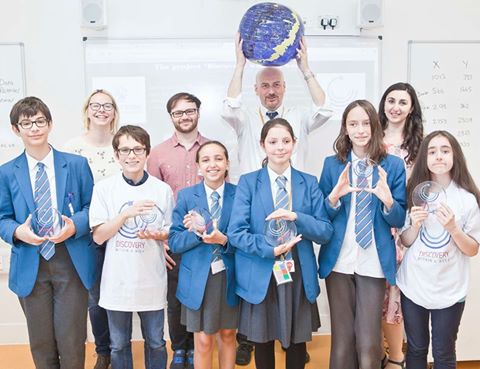 The initiative is supported by the BE OPEN foundation. Its aim is to introduce young people from disadvantaged areas of London to the fascinating world of astronomy. The project ‘Discovery within a Week’ brings together PHD astronomy students from UCL’s Physics and Astronomy department to mentor secondary school pupils and guide them through the materials and technology.

A number of London schools have already signed up for the programme; with more schools set to join up with the onset of the new academic year in autumn. The aim is to continue to extend the scope of this initiative to a broader range of London schools over the next few years.

Over the course of the project, school children from both London and Moscow join professional astronomers from their respective countries, in order to exchange their experience during weekly Skype conferences. The objective of this interaction is to create a network of enthusiastic young observers and researchers.

“The ultimate goal of ‘Noosphere’ is to encourage younger generations to approach the world with an informed, open and universal perspective – that will keep our society from sliding into the chaos of differences and conflicts. We should show both children and adults the universal aesthetic and scientific principles that unite people from all parts of the world”, Elena Baturina, Noosphere founder, business woman and philanthropist.

‘This is a fantastic new collaboration between East and West, bringing cutting-edge science and astronomy into London classrooms and broadening children’s perceptions of the world they live in. We want more schools in London to join this journey of discovery’, Matthew Patten, Chief Executive of the Mayor’s Fund for London.

Noosphere’s initiative is innovative in its methodology. Its participants not only enhance their theoretical knowledge, but also make real astronomic discoveries. The stars and asteroids they discover will be recorded in the International Variable Star Index, and the Minor Planet Center at the Smithsonian Astrophysical Observatory, Harvard.

The Foundation’s programmes are universal and can be implemented anywhere in the world – over the years Noosphere has realised a variety of projects in India, Israel, Bulgaria, Romania and Austria.