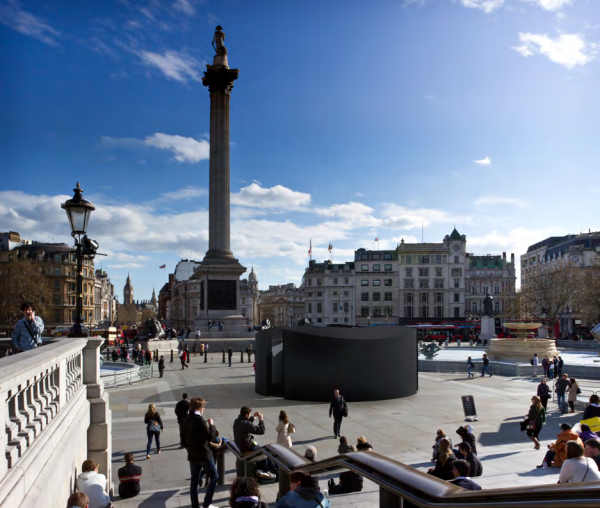 This September sees the arrival of the BE OPEN Sound Portal in Trafalgar Square as part of the tenth anniversary of the London Design Festival 2012.  Situated within one of London’s most iconic public spaces, the BE OPEN Sound Portal is an entirely new kind of installation that focuses on the design that you can’t see – that of acoustics and sound – rather than visual spectacle.

An alien black, rubberised structure will be home to finely-tuned audio technologies aimed at delivering pure acoustic experiences to visitors in the middle of Trafalgar Square – one of the busiest and aurally chaotic environments in London.

Every day, the BE OPEN Sound Portal will host one of five leading musicians and sound artists, each of whom has been specially commissioned to create a unique soundscape. Expect a range of vibrant sonic and musical responses, from the dramatic sounds of the natural world, such as glaciers breaking up, to exquisitely detailed electronic music.  Cocooned from the external noise and bustle of the city, the BE OPEN Sound Portal allows visitors to experience a very different environment, one created by sound alone.

BE OPEN Foundation, the global initiative to foster creativity and innovation, and the London Design Festival are co-producing a project in Trafalgar Square. BE OPEN was set up to explore ways in which excellence in creative thinking can produce real social innovation, encouraging new work at the frontiers of design.  One of the things that attracted BE OPEN to this project is that it’s effectively an ambitious mobile laboratory for exploring the boundaries of what can be achieved with sound technology – an active demonstration of design’s transformational abilities .

“We’ve set up BE OPEN so that we can work with the great creative minds of today, encouraging them to continue to innovate so that they can improve on what we have and generate solutions for tomorrow’s world.  The designers of the BE OPEN Sound Portal and those who will be creating soundscapes for it are at the cutting edge: they are the future of acoustic evolution.  So a journey into the BE OPEN Sound Portal is a must for anyone interested in hearing what tomorrow will be like.”

The BE OPEN Sound Portal is designed by Arup, world leaders in the area of acoustic engineering, with content commissioned by contemporary music organisation Sound and Music. One of the challenges that the Portal has set itself is how to change our experience of urban space. Arup’s acoustic technicians, engineers and designers have long been pioneers in this field, using sound design to change how we experience airports, stadiums, auditoriums, even roads. The BE OPEN Sound Portal gives them a real life experimental space to develop this work and actively demonstrate design’s transformational capabilities.

The acclaimed Norwegian artist Jana Winderen researches the hidden depths of sound with the latest technology; her work reveals the complexity and strangeness of the unseen world beneath. The audio topography of the oceans and the depth of ice crevasses are brought to the surface for the listener. She is concerned with finding sound from hidden sources and revealing the secret voices of the natural world.

Ivan Pavlov is a Russian-born resident of Stockholm who has been releasing electronic music as COH since 1998. Characterised by exquisite detail and subtle sound manipulation, COH’s music plays with popular culture references such as folk, metal, pop and dance music whilst retaining a truly original voice. Aside from his many solo projects Pavlov well know as a collaborator with many leading electronic musician such as Coil, Cosey Fanni Tutti and Peter Christopherson.

Nathaniel Robin Mann is an artist, performer, composer and sound designer.  He is a specialist in ambisonic recording and is currently artist in residence at The Pitt Rivers Museum and Oxford Contemporary Music as part of Sound and Music’s Embedded programme. As well as being active as a solo performer he is a member of the avant-folk group Dead Rat Orchestra and has collaborated with many leading international artists such as Adam Lowe, Anish Kapoor, Dionisio Gonzalez and Marc Quinn. In 2008 he won the Gran Prix of the 11th Cairo Arts Biennial with Lara Baladi.

London based electronic music performer and composer Jo Thomas is a creator of richly detailed sound worlds. She was awarded the Golden Nica in Prix Ars Electronica 2012 for her work Crystal and her first solo release Alpha was nominated for a Qwartz award in 2011. Aside from her composition activities she teaches sound design, composition and music technology at the University of East London.

Squarepusher is the principal pseudonym adopted by UK-based recording artist Tom Jenkinson. His compositions draw on numerous influences including drum and bass, acid house, jazz and electro-acoustic music. His music is created from a combination of electronic sound sources, live instrumental playing and digital signal processing. He is renowned for his bass playing; Flea of The Red Hot Chilli Peppers has described him as “the best electric bass player on Earth.”

BE OPEN is a creative think tank whose mission is to promote people and ideas today to build solutions for tomorrow. It is a cultural and humanitarian initiative that aims to harness the brainpower of creative leaders through a system of conferences, competitions, exhibitions, master classes, cultural and art events.

Behind the creation of BE OPEN stands an international team united around Russian businesswoman, entrepreneur and philanthropist, Elena Baturina.

A long-term, international, multidisciplinary, multi-faceted project, BE OPEN will allow leading contemporary thinkers and creatives to meet up with those in the media and business, discuss their ideas and visions and ultimately make change happen.

BE OPEN Sound Portal is one of several BE OPEN events scheduled during the London Design Festival.

Arup is the creative force at the heart of many of the world’s most prominent projects in the built environment and across industry. From 90 offices in 35 countries its 10,000 planners, designers, engineers and consultants deliver innovative projects across the world with creativity and passion. They have collaborated with many sound artists including Bill Fontana at the TATE in 2006.  www.arup.com

Sound and Music promotes challenging contemporary music and sound art through a range of projects, incorporating live events, learning, artist development and digital platforms. It embraces complexity and risk-taking and invites audiences to listen in new ways. Sound and Music’s ambition is to reach as broad an audience as possible by providing opportunities to experience the enormous diversity of this work and the many different approaches to creating, producing and presenting it.

The official guide to the London Design Festival 2012 will be distributed across London in early September.  Continually updated Festival details are published at www.londondesignfestival.com.

Facts about the London Design Festival

The London Design Festival is a key constituent of London’s Autumn creative season, alongside London Fashion Week, Frieze Art Fair and the London Film Festival.  Established in 2003 its role is to celebrate and promote London as the world’s creative capital and gateway to the UK’s world-class creative community.

With an audience of over 350,000 attending Festival events and more than 2m people experiencing large scale outdoor installations, the London Design Festival can now claim to have the world’s biggest audience for a design event, with visitors from over 50 countries recorded in 2011.

Last year there were 65 shows and events at Festival’s central hub at the V&A and the Museum recorded a significant 60% increase in visitors during the Festival period.

The Festival works closely with, and receives financial support directly from, the Mayor’s Office – having transferred support from the London Development Agency.