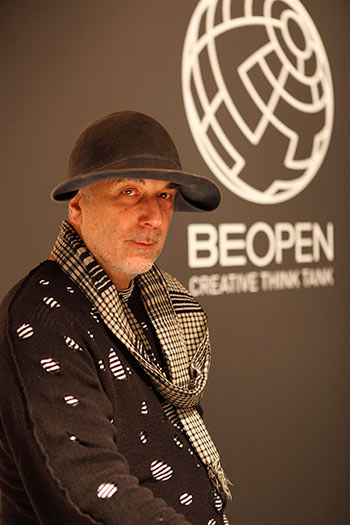 “I am not really a teacher,” says Ron Arad. A strange remark from a man who has spent 12 years as Professor of Design Products at the Royal College of Art. Especially strange when one considers that he was speaking on a platform – part of the Beopen Talks in Basel –  to discuss how we educate tomorrow’s innovators. But then in his own work Arad has achieved greatness by going against the grain. His Concrete Stereo (1983) was a hi-fi coated with protective resin, then encased in concrete before being chipped away to reveal rusting steel beneath. It is often seen as the emergence of a punk aesthetic in design: an emblem of the times. However as the Museum of Modern Art’s citation describes it, it was also “a surreal challenge to the sanctity of consumer electronics.”

If it was only that, however, then it wouldn’t have made it into the MOMA. There are a number of design languages which the Concrete Stereo reconfigures: the monumental and the ephemeral; the modernist and the high tech. Yet it is also strangely emblematic of Arad’s career as well. From the beginning of the 1980s he has both created the career of designer and simultaneously destroyed it: revealing how it operated and stopping it from working in a convenient way. In his own work, Arad was continually exhaustingly experimental, often to the detriment of the quality of his work. The well-tempered chair from 1986 is formerly exuberant but utterly impractical. His Tom Vac Chair designed in 1997 meanwhile is a big seller, that sits at the heart of the collection of that great vendor of modernist furniture ,Vitra. Utterly comfortable in a commercial world, he also responds to it critically and capriciously, working, one feels, with whoever he wants, for the hell of it.

Despite this commercial success and recent exhibitions at premier public art galleries, his greatest achievement, despite what he says, has been as an educator. Arad has had an unparalleled influence over design teaching in the UK. His interview in Basel by Lucas Verweij was a great opportunity to look back on this important tenure. Speaking alongside Daniel Charny and Jurgen Bey two inspiring educators in their own right but also examples of the kind of independent spirits that Arad brought into the RCA,  he analysed his time at the RCA with a singular mix of self-effacement and provocative remarks he has become known for.  ‘First of all,’ he says. ‘We didn’t have the responsibility of teaching people anything,’ he said. “It was more about un-teaching. We always liked to laugh that we took people who are perfectly employable and make them in two years unemployable.’

Yet as his former colleague at the RCA Daniel Charny added, ‘yes but they become good at employing.’  Arad was keen to stress that he was never interested in teach entrepreneurship. It is a word, he says, that he doesn’t recognise. This is despite the fact that he has established a high profile design practice (with an architects practice that quietly churns out top quality work alongside it). For Arad, design teaching, particularly tat the post-graduate level, ‘is about grown up people who want to delay a little bit the grind of the real world.’ He is realistic about the role of the teacher.  ‘Most people enjoy college not because of their teachers but in spite of them. The most important thing is the peer group.’

Yet this relationship does not simply happen and must be created.  Arad instilled and fostered a culture in which a critical means of both thinking about design and designing objects is considered valuable in its own right. Arad described his most important role at the RCA as going through the portfolios of the potential students that the various course leaders had passed on and effectively trying to assess whether they could be included somehow. He recalls looking at the portfolio of a student called Roland Lamb. I could see why he wasn’t chosen, says Arad. “He was not a good form giver.” But he was a graduate of Harvard.and spoke Cantonese, Mandarin and Japanese.  A former pupil of the pioneering Summerhill School – the original alternative free school, Lamb was able to find at the RCA, what Arad describes as “a place that could acknowledge how good he was.” Lamb’s new approach to building three-dimensional pressure-sensing interfaces is currently patent-pending.

He is just one success of many: Paul Cocksedge, Peter Marigold, Simon Hasan. Arad’s anti-institutionalism may occasionally seem like a pose, especially considering the fact that he has successfully worked within an institution. However, this is not a self-confounding pose, but an illustration of his strength. Of the RCA, which its situated in exclusive Knightsbridge, just to the south of Hyde Park, he says:  ‘I always wished it was in Camdem or Shoreditch not in SW7. it’s not a fair thing, it’s not a democratic thing, but it breeds amazing students. ‘More important than the city culture is added Daniel Charny ‘the studio culture – not the city but the actual way people interact when they are learning.” Unlike Bey and Charny who both believe that the more design taught the better, Arad is not sure, retaining clear misgivings about teaching design at all, whilst doing it successfully.  ‘Italy stopped producing masters of design, when it started teaching design,’ he says.

Yet he clearly has faith in teaching. f one of the definitions of being educated is to be able to entertain two conflicting ideas at once, then a great educator – as Arad has been – must be able to do that in extremis.