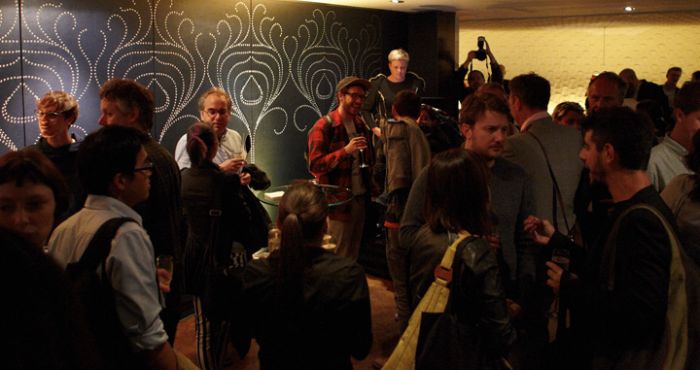 The debate in Covent Garden last night was a sound argument for a sonically enhanced future. Can intelligent, personable sound design encourage us to spend more in retail environments? Could sound help the older generation feel more comfortable? Will electric cars soon be jamming our streets, all playing the same sonorous ‘G’ note from beneath their bonnets? Can a better understanding of sound and our sensory systems help us design anything from household products to skyscrapers that can breathe, grow and ‘think’?

We learned about 3D pressure-sensing interfaces; the pioneering use of ‘real’, ‘ordinary’ and ‘found’ sounds in electronic music; and how music psychology plays a part in neuroscience.

These were some of the points raised at the BE OPEN Sound Design Talk, held at The Hospital as part of the London Design Festival. The panel included designers Tom Dixon and Roland Lamb, as well as musicians Matthew Herbert, Jo Thomas and Lauren Stewart, co-director of the MSc in music, mind and brain at Goldsmiths University.

The wider ambition of the BE OPEN think tank is to explore and debate the infinite possibilities of all five traditional senses – sight, smell, taste, touch and sound – as a starting point for research into sixth-sense design. BE OPEN founder Elena Baturina believes this research would provide ‘the ultimate synthesis of human sensory perception and technological genius, offering an infinite variety of sensations that would overcome the perceived limitations of design today’.

The panelists certainly rose to Baturina’s challenge. Dixon, the visionary behind Design Research Studio, whose clients include Shoreditch House, Jamie Oliver’s new restaurant Barbecoa and the upcoming Mondrian hotel at Sea Containers House, wanted to know why ‘restaurants are, sonically speaking, often some of the most unpleasant and worst designed spaces imaginable’.

Meanwhile, Roland Lamb introduced us to his radical Seaboard, a reimagining of the traditional piano keyboard with powerful polyphony and rich tactile information that could potentially be applied to remote surgery, prosthetic limb control and robotics. A performance by avant-garde electronic musician Jo Thomas closed the evening. It had been a night for listening, learning and sounding off.