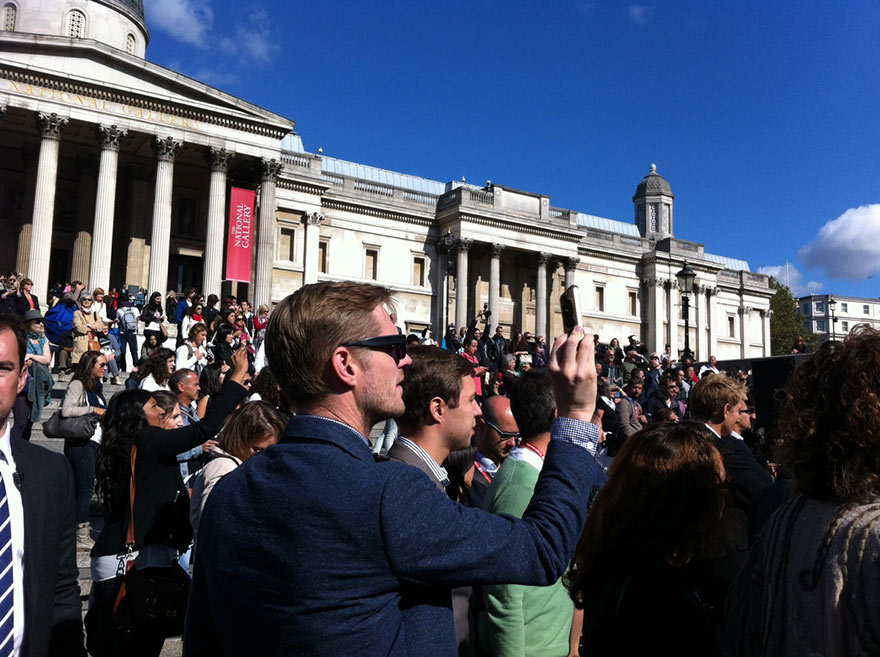 London, Wednesday 19 September:  The BE OPEN Sound Portal has arrived in London’s Trafalgar Square.  A mysterious, black, rubberised cube, it will host five soundscapes over the next five days so that the public can ‘switch on their hearing’ to appreciate the most advanced audio technology in the world.

The portal is a co-production by the Foundation BE OPEN, a think thank to foster creativity and innovation and the London Design Festival and is one of the landmark events of this, the tenth anniversary of the Festival.

Founder, Russian businesswoman, entrepreneur and philanthropist, Elena Baturina, said “Today, here in London, BE OPEN launches a year-long programme to research design of the 5 senses, perhaps leading us closer to that mysterious sixth sense, intuition.  I believe that intuitive design is a synthesis of the sensory and technology.  It offers an infinite number of sensations that will remove the perceived limitations of contemporary design. In this historic city, in this square that has witnessed so much over the years, we invite you to experience this state of-the-art artifact that will take us back to the roots, to our basic values, through technology.“

The portal was launched in the presence of London’s Deputy Mayor for Culture and Education, Munira Mirza, and London Design Festival director, Ben Evans.

Munira Mirza said: “the portal is a fantastic way of bringing design to a wider public.  It comes to London during our largest ever public festival of culture. We at the Mayor’s Office are proud to support and fly the flag for London design.“

Ben Evans said: “we have had a very exciting partnership with BE OPEN; I think you’ll be hearing a lot more from this dynamic Foundation.”

After its residency in Trafalgar Square, the Portal will be installed on The Rootstein Hopkins Parade Ground at Chelsea College of Art and Design, where it will be part of an inter-college project to continue research into sound, with students generating new sound works that will be showcased in 2013 as part of BE OPEN’s educational platform, BE OPEN Inside the Academy.

London is the launchpad for BE OPEN’s research into sound, with the Sound Portal at the centre of the programme.  Other BE OPEN events during the London Design Festival include: BE OPEN Sound Design Talks at the V&A and Hospital Club; BE OPEN Awards exhibition and ceremony at 100% Design to identify the next generation of creatives; and BE OPEN SPACE, a flash market at Tom Dixon’s The Dock, showcasing emerging practices with an emphasis on sensory design.

For more details on BE OPEN see www.beopenfuture.com