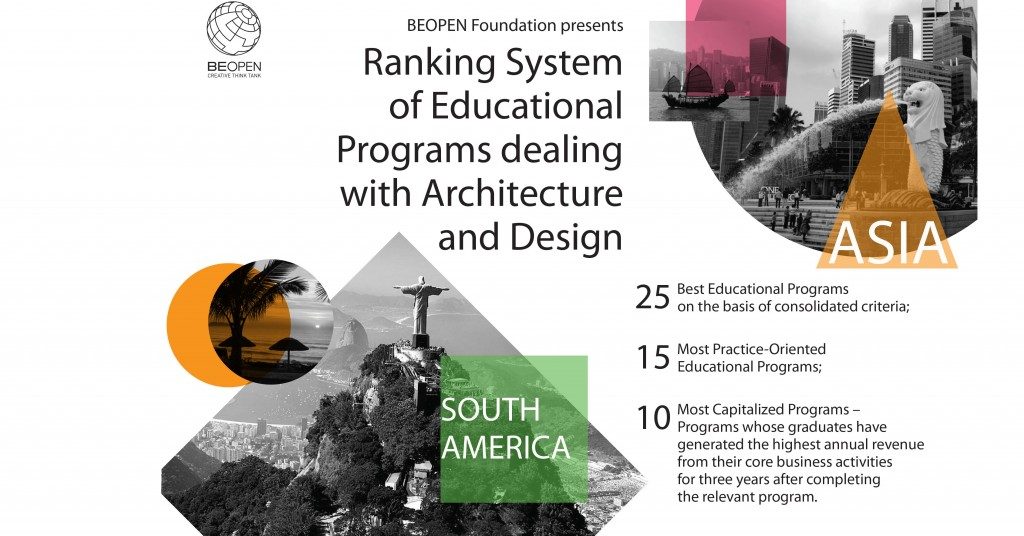 The BE OPEN philanthropic foundation announces the completion of another stage of its global educational initiative within the Inside the Academy strand – the design and architecture institutions ranking system. It has conducted extensive research of the curricula of those institutions providing education in design and architecture in respect to two specific developing regions: South America and Asia.

The initiative was launched in 2013, when the foundation started developing the research methodology through analyzing secondary creative education across Europe, the results of that analysis were presented in September the same year. Switching from these most elaborate and “mature” educational systems to ones of South America and Asia, BE OPEN updated its methods to better fit their peculiarities – the dynamic growth, fast development and outstanding potential in the majority of business and public areas.

The new approach consists in analyzing the potential, weak and strong points of educational courses themselves, but not the material base of the schools. The results provided by the new approach has been found most valuable for the benefit of all the parties involved, and the future generations of creatives in particular. The methodology developed will be applied globally over the next years, and that will include a comeback to Europe.

The research is designed to answer the needs of two target audience groups: applicants to academic programs in design and architecture around the world, and the business community related to the spheres, and representing potential employment. The first will find the ranking system most useful when choosing the optimal educational program and institution, while the second will be able to identify those courses and, consequently those that would best suit the requirements and needs of their business endeavors.

The research conducted by BE OPEN covered 102 design education programs in South America (Argentina, Brazil, Chili and Colombia) and 96 design education programs in Asia (India, China, Japan, Thailand and Singapore). BE OPEN has reviewed both customary curricula, such as Architectural or Interior Design, and the relatively new and developing disciplines of Industrial and Multimedia Design, Interactive and Sound Design, Communicative Design. The Ranking reflects integral quality estimation of the level of preparation of high school graduates determined by statistical data relating to the Universities’ educational and research activities, based on the key referent group opinion, including employers, professors and graduates.

“The schools selected for the ranking guides offer outstanding curricula, and we can recommend them highly, though their approach and its implementation may widely vary,”commented Elena Baturina, the founder of BEOPEN. “Our goal is to identify the diversity, underline the strongest points and provide the overall systematized information to those who will greatly benefit from it – and that is the young creative minds who aspire to professional careers in creative disciplines, in the first place.”

For the better convenience of the potential users the ranking has been formed into three top-lists for each of the geographic regions: