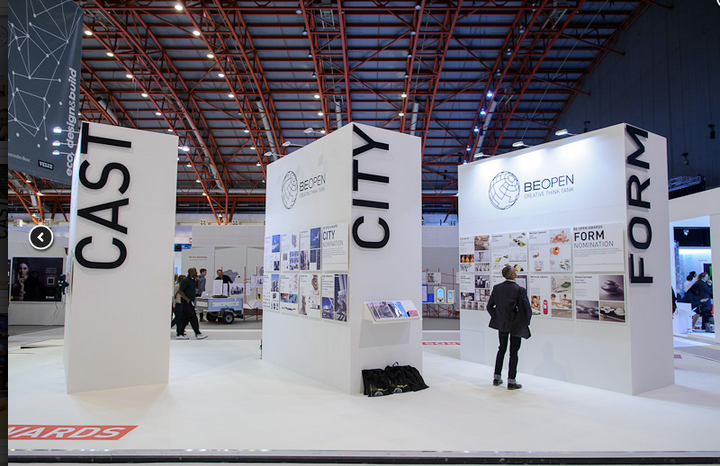 London, September 21, 2012 – Today the winners of the BE OPEN AWARDS, an international scheme for the promotion of young creative talent, were announced at 100% Design.

The winner in the CAST category is Alexandra Kharakoz from the UK, with Sonic Landscape, an interactive, real-time, sonic sculpture designed to heighten awareness about how sound is produced.

First place in the CITY category goes to Chak Ming Sin from Hong Kong with the Evaporative Cooling Capillary, a sustainable method of regulating building temperature through natural cooling, inspired by the structure of a termite mound.

And the winner in the FORM category is Bernier Samuel from Canada with Project RE_, a transforming and upgrading of objects reaching the end of their useful life.

All three receive study grants for leading international institutes of design and share €10,000 to further their projects.

“The reason I am fascinated in design is that it has the potential to change the world around us, for the better!” said Elena Baturina, founder of BE OPEN. “These winning works are fascinating examples on improving on what we have and I am delighted that we are able to give them a worldwide platform through BE OPEN.”

The winners were selected from over 300 entries from 47 countries and the winners will be selected by a prestigious design industry jury, presided over by Patricia Urquiola (designer and architect), with Tom Cheshire (WIRED magazine associate editor), Daniel Charny (Independent Curator and Director at From Now On), Pei-Ru Keh (design editor of Wallpaper magazine), Vladimir Pirojkov (designer), Noma Bar (graphic artist), Christopher Turner (editor of ICON magazine) and William Knight (100% Design event director). Projects were selected that showed strong creative thinking, with the potential to become must-have designs for the future.

Chair of the judges, designer and architect Patricia Urquiola said “The submissions revealed an impressive mixture of courage and vision, ambition verging on the impossible, tempered with just the right amount of practicality. Proposals seem to be guided by intuition and perception of demands on a local and national level, rather than an egoistic exercise. We made decisions based on the consistency of the idea, its presentation and practicability, rather than its timescale for development.”

The shortlisted work was showcased on the BE OPEN stand at 100% Design as part of BE OPEN TO THE SOUND OF THE FUTURE, the think tank’s umbrella theme for their presence at the 2012 London Design Festival.

This is the second iteration of the awards scheme that launched in Milan in April 2012.