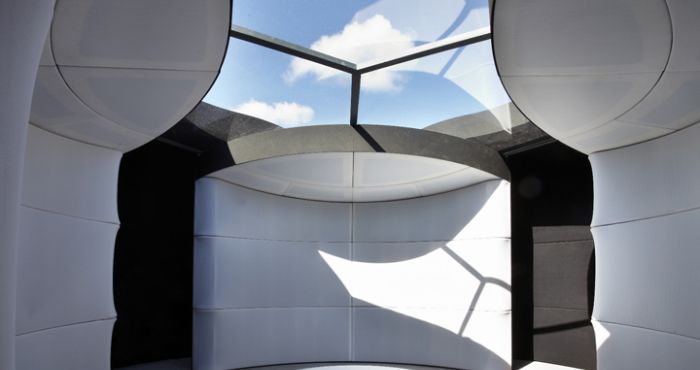 An intriguingly alien coal-black rubberised pod that might have been ripped from the set of ‘Prometheus’, the Sound Portal was a stark visual counterpoint to the bubbling fountains and boisterous tourists in the square. Visitors entered the Portal’s womb via a walkway, where a carefully orchestrated white noise washed over like a wave, broadcast by nine unseen speakers.

Further inside, they began to hear the music, works specially commissioned by Sound and Music for the giant boom box A piece by the magnificently bearded Nathaniel Robin Mann evoked steam engines with creaking organ bellows and community singing. Electronics maestro Jo Thomas concentrated on the beautiful hiss and fizz of cymbals, while Jana Winderen replayed ultrasounds from Russia, Thailand, Norway and Sweden, which she recorded using microphones placed above and below waterlines.

Drum and bass legend Tom Jenkinson, aka Squarepusher, eschewed dancefloor bleeps and beats for chromatically modulated classical guitar, composed with the help of mathematical formulae based on the vital statistics of Nelson’s Column. The result bore sonic comparison to fragments of light intermittently reflecting off a whirlpool. You really had to hear it to believe it.

Elena Baturina, the Russian entrepreneur, businesswoman and philanthropist who founded BE OPEN, announced: ‘Today, here in London, BE OPEN launches a year-long programme to research design of the five senses, perhaps leading us closer to that mysterious sixth sense, intuition. I believe intuitive design is a synthesis of technology with the sensory. It offers an infinite number of sensations that will remove the perceived limitations of contemporary design. In this historic city, in this square that has witnessed so much over the years, we invite you to experience this state-of-the-art artefact that will take us back to the roots, to our basic values, through technology’.

Arup – whose acoustic architects work with the likes of Zaha Hadid and Frank Gehry – were the designers on the project. They provided the musicians with access to their ingenious Sound Lab facility, where they’d created a computerised 3-D aural facsimile of the Portal before it actually opened. The symphony of sound is open to the public for four days as part of the London Design Festival, before it moves away in preparation for its next stint on the parade ground at the Chelsea College of Art and Design in November.